UK Skate Mental flow rider Adam Keys has smashed out a crackin’ full part that will leave you psyched to hit the streets, DIY spots and everywhere else. Adam skates everything and has one of the best attitudes in skateboarding – read his interview and make sure to enter the competition to win a Skate Mental package too!

You’ve ridden for a couple of British brands and now you’re representing a US brand, Skate Mental, in the UK – are you stoked?
Yeah of course, Skate Mental is such a privilege and I’m stoked to be doing it, it’s a brand I’ve been into since it started, from the team to the board graphics, they kill it. It’s sort of a shame there’s no one else in the UK representing the brand at the moment as it would be sick to hook up and skate, but its cool – I still skate with the same tight crew of mates that I have done for years so it’s all good.

How was your time on Witchcraft? Did the moshers pick on you?
Witchcraft is sick! I really enjoy skating with those guys, they all kill it so hard! The trips we went on were super fun and we had really good sessions. But no, ha ha, I don’t think I was picked on, it was kind of cool being the odd one out on the company. It also pushed me to skate gnarlier things that I wouldn’t usually skate, big ramps were never really for me, but skating with those guys definitely made me want to learn how to do it. I still see the guys a fair bit too which is really cool.

Who’s your favourite metal band, you must have one after falling in with that crowd?
Ahh man, metal was never really my thing. However on a Witchcraft trip a couple of years ago French had a Merciful Fate CD in his car which we were listening to, it kind of grew on me and after the trip I bought their greatest hits album – its sick! I still listen to it now when the Hip Hop gets a bit much.

Where do you skate mostly? Have you got a good scene where you live?
Well, I’m living in Portsmouth at the moment, but I try to travel as much as possible. Portsmouth is pretty sick for skating and there are a few really good spots dotted in and around the city, there’s also a fair few decent skate parks to go to as well when you want to keep it chilled. Yeah, theres a rad scene here though, there are loads of crews of dudes that hold it down around the city. I tend to skate more with Marc, Jed and Greg – we often get a little mission on and go have some fun. It’s always good going out the the local guys too though, it’s really cool going skating with all the Bored Of Southsea guys too though: Dobbo, Jak, Gary, Toby and the rest of the guys all kill it and know how to party for sure, ha ha!

What’s your life like? A good balance of work and play? Do you think you might want to do anything differently?
Yeah, I like to think I keep a good balance of work and play but I think play plays a much bigger role at the moment. The average week sort of just consists of skating most evenings maybe at a local park or something like that and we get on the street missions at the weekend. Maybe go out to the pub with mates or just chill after so I don’t think there would be anything I’d change really.

You’ve been mates with a few better known British skaters for a long time now – did it help shape your attitude towards skating and sponsorship?
Oh man yeah for sure. I’ve been skating with Marc (Churchill), Jed (Cullen) and Greg (Nowik) on the regular for a fair few years now. These guys have been killing it and hooked up since I started skating, so yeah –  their attitude towards it all has definitely rubbed off I think.

What’s your take on the skateboard media these days – do you still watch full length videos or is 15 seconds at a time enough now?
Yeah man, of course I still watch full length skate videos, I recently watched that new Plan B video and I was pretty blown away. The first guy Chris Joslin, I swear there something not quite right with him, the stuff he’s doing really is on another level. I’m really into all the Static videos too. I’m all about the VX footage – it makes it looks so good. Its not all ‘skatebot’ too which makes it easier to relate to, if that makes any sense ha ha!

Was filming your Skate Mental part easy? Was there anything that took a long time or any good stories?
There were a few things that were I found pretty difficult for sure. The first trick, the backside flip over that handrail took a couple of visits. The run-up is super rough and the landing into the bank wasn’t the easiest roll out either! I really struggled to backside ollie it so I’m not really sure exactly how that backside flip even happened! The nollie inward heel into that bank under the bridge was pretty nasty too. The go before I made it I took a really bad slam which almost made me not want to carry on – thanks to Snadds, Jess and Andy who made me keep going, I appreciated that guys! I seem to remember that fakie truck bash thing on the Daveside D.I.Y quarter taking ages too. Anything on that feels rad though – its not easy to skate at all. Overall you’ve got the weather and security guards to contend with too which never makes it easy!

What’s the most important video or part to you? Is there something you’ve watched that shaped your skateboarding more than anything else?
Wes Kremer. Anything that guy does is the best – total all-terrain beast with a huge bag of tricks. Watching his sections get me so hyped to go skate, he looks as though he’s just having so much fun with it too. His ‘Crusty By Nature’ part was just such a joke and had the sickest song too. I’ve also always been a huge fan of Cody McEntire – his style and consistency is just stupid and his part in the Digital ‘Smoke And Mirrors’ video is pretty old now but will be one of my favourite parts forever. If you’ve not seen it go watch it…now.

Do you have any creative impulses outside skateboarding? Are you secretly doing watercolours at home?
Not really no, skateboarding and partying takes up most of my free time, so no – no watercolours for me. Sounds kind of cool though.

What would be better – a week with Gucci Mane or a week with Kelly Brook?
Pfft! what kind of question is this! Errrr… I think I’m gonna have to say Gucci. Kelly Brook is obviously very attractive but maybe over a whole week she could get a bit annoying. Or maybe not, ha ha! Plus Gucci probably has a few spare women kicking about the place anyway, ha ha ha!

What are your plans for the future? Do you have any travels planned this year?
Yes, Yes! I’m off to Barcelona in a couple of weeks. Malmö and Copenhagen in June/July. Berlin too, that place is so sick! Maybe back to Barca again at some point – that’s all we’ve planned so far but I’m sure more trips and missions will pop up.

Got anyone you want to thank or did you achieve greatness all by yourself?
Shiner Distribution for Skate Mental and Thunder Trucks.
Massive thanks you to James Harris, Liam Seale and Alan Glass for tolerating my shit whilst filming this part, its easy to get a little stressed at times.
Everyone at Bored Of Southsea for the support over the past years – you guys kill it! Gary Scott, Ian Wheatstone, Lloyd Davies, Toby Taylor DIBS!
Everyone I skate or chill with – you know who you are!
Anyone that has helped me out so far with skateboarding.
Student James, Marc Churchill, Greg Nowik, Jed Cullen, Alex Thornhill, Matt Grey, Jak Tonge.
The Africans for taking the edge off on a weekend.

And, of course, anyone I have forgotten… Cheers! 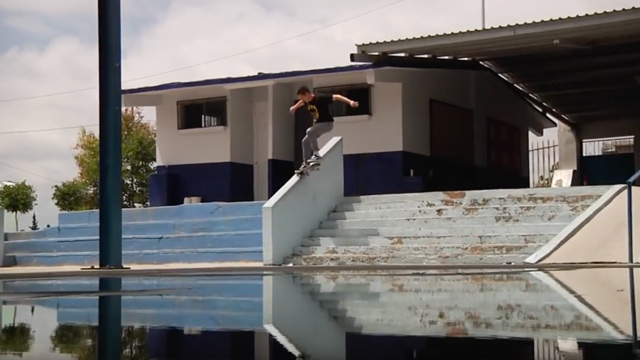 Skate Mental have just announced that they have a new Am in their ranks by the name of Dan Dubois. Read more 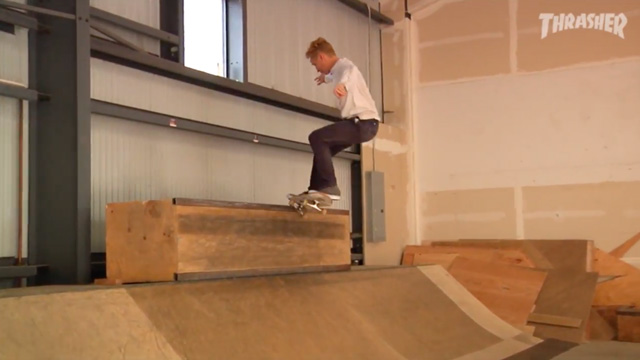 The Skate Mental team hit up Staba’s warehouse whilst Brad cracked on making jalapeño pizzas… sounds like a fun time was had by all! Read more 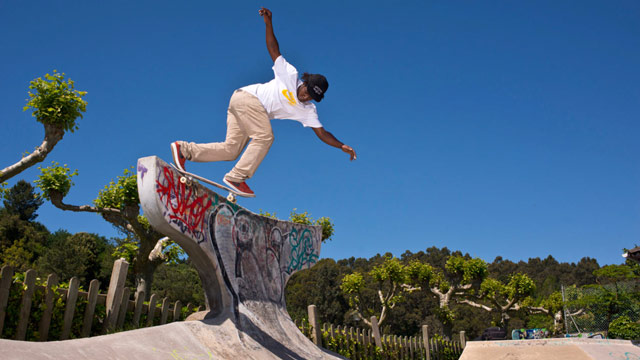 Colombian born, raised in Sweden and destroys every inch of ‘crete anywhere in the world… Fernando Bramsmark is a tank! Read more 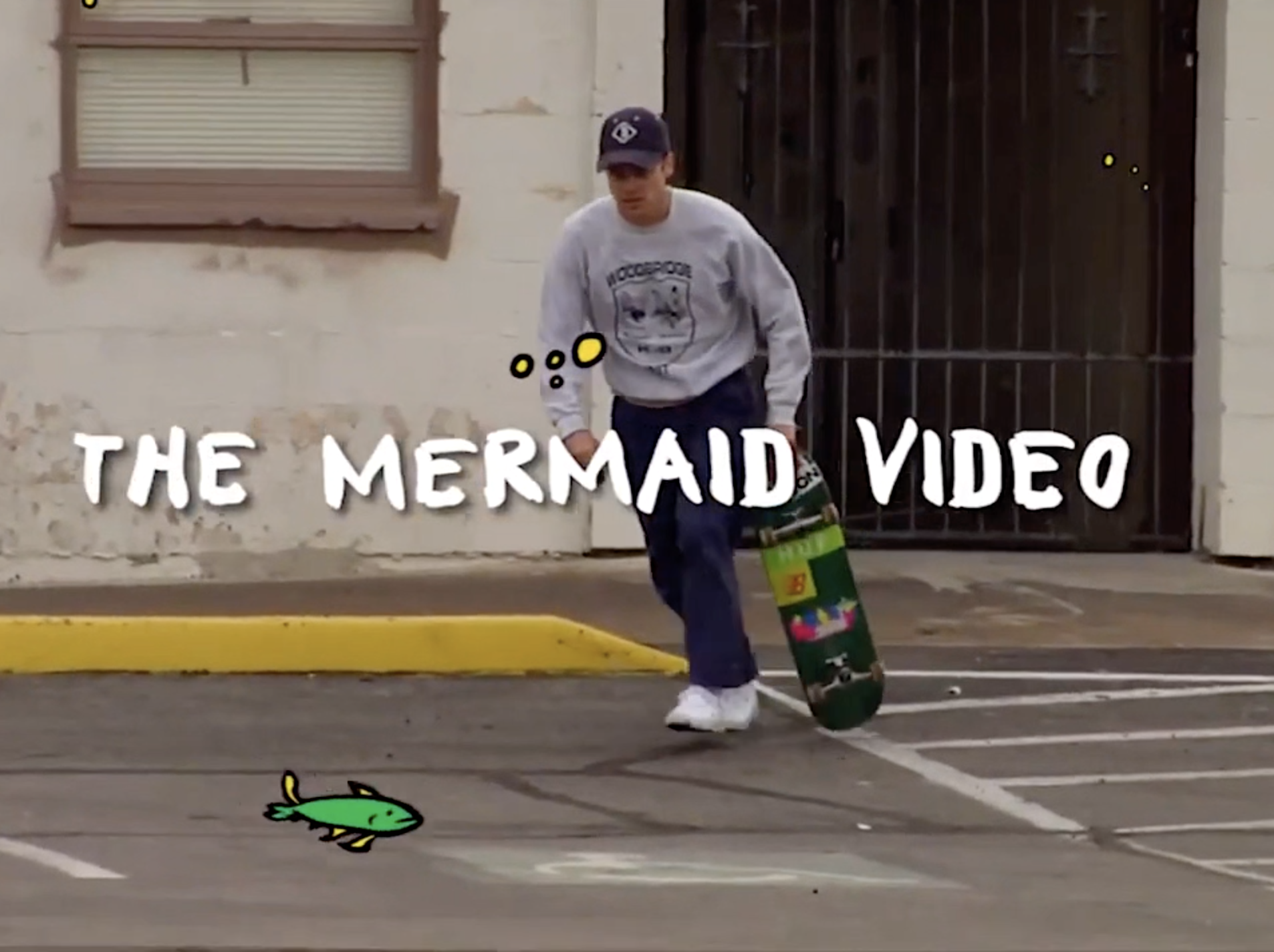 Krooked have released a new edit featuring some new clips, forgotten clips and everything in between. Check out some of the Krooked squad’s footage. Read more
Posted on August 7, 2019 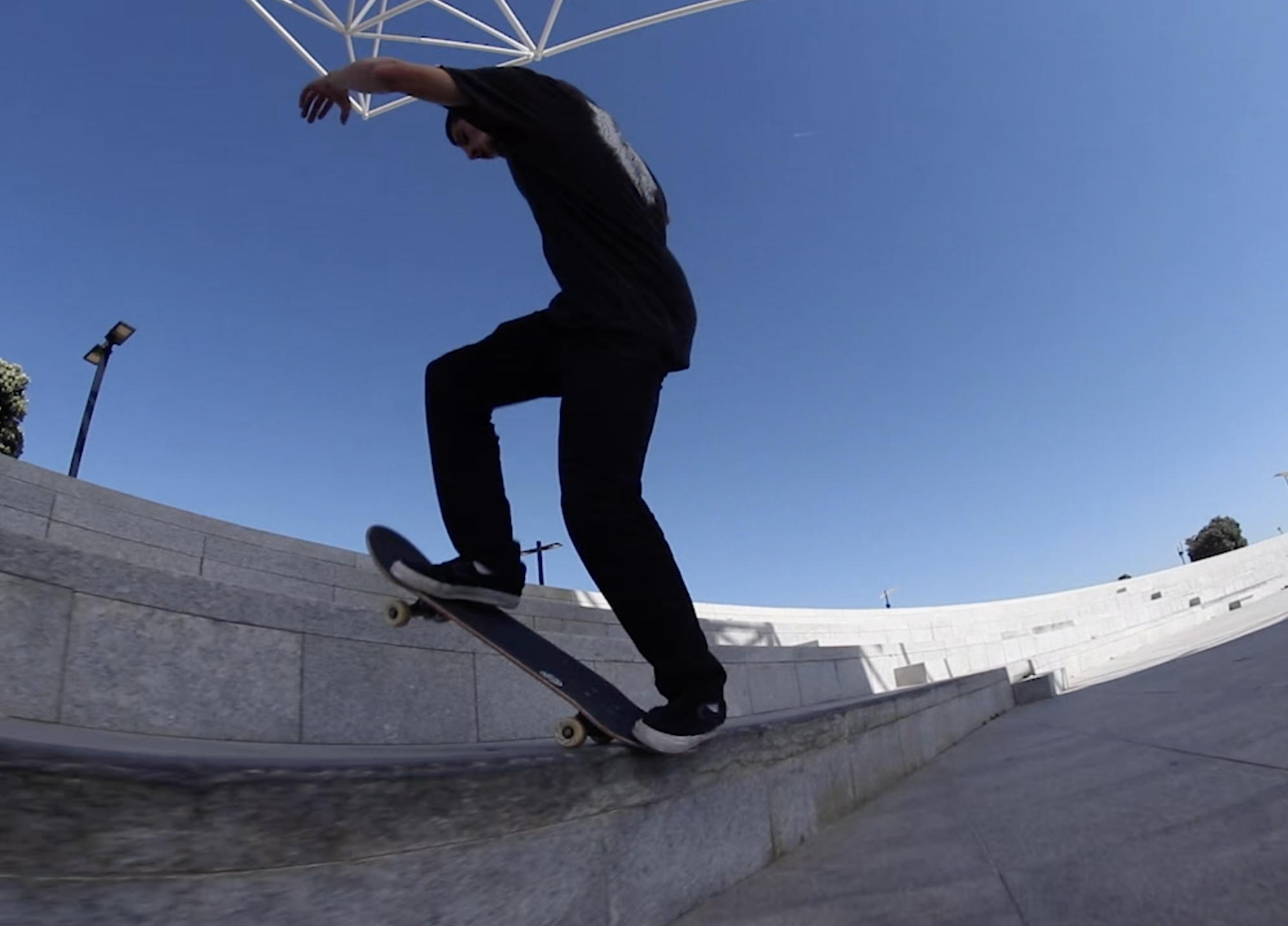 Earlier this year we headed out to Portugal to meet up with João Allen, Gabriel Ribeiro, Daniel Pinto, Bruno Senra, and tattooist Luis Martins Read more
Posted on August 2, 2019 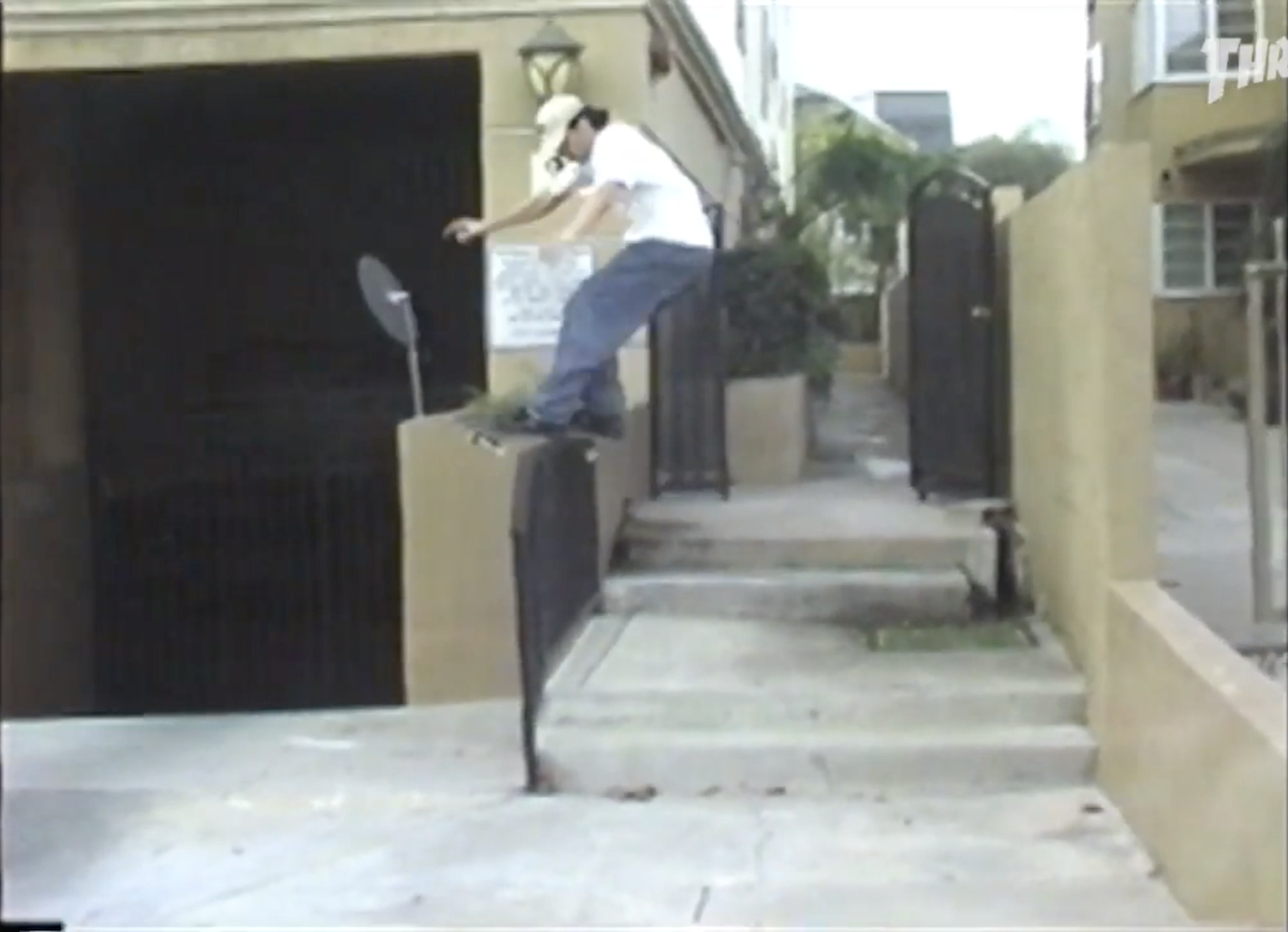 Yardsale sets the mood and settles you into their vibe… Read more
Posted on July 19, 2019

Krooked have released a new edit featuring some new clips, forgotten clips and everything in between. Check out some of the Krooked squad’s footage. Read more
Posted on August 7, 2019

Earlier this year we headed out to Portugal to meet up with João Allen, Gabriel Ribeiro, Daniel Pinto, Bruno Senra, and tattooist Luis Martins Read more
Posted on August 2, 2019

Yardsale sets the mood and settles you into their vibe… Read more
Posted on July 19, 2019